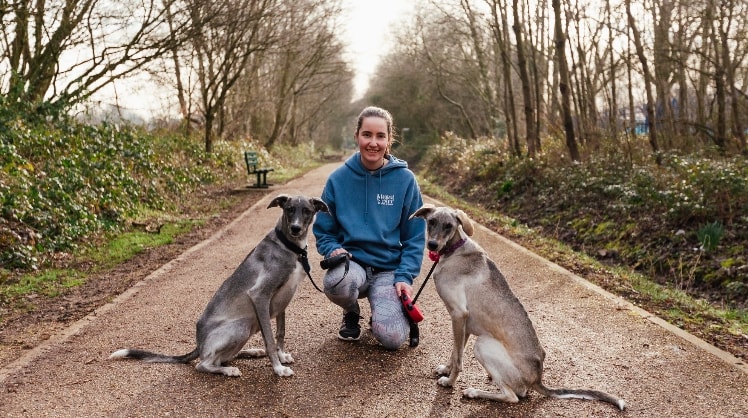 Since before I can remember I have always wanted to work with animals. My parents have never understood where my obsession

with animals came from, they like animals too but not nearly to the same extent as me. When I was just 3 years old my mum had convinced my dad to let us get a cat, let's just say that Dad is more of a doggy person! I remember it like it was yesterday. A lady came to our house to make sure it was safe enough for kittens and she showed us a photo album to look at all the cats which were available. My eyes were immediately drawn to a little black and white fluffball walking across the courtyard. She had a black back and tail, and a white belly and legs, but three of her tiny paws had little black socks on. "That's Spangles," the lady told us, "she's the runt of the litter but she's perfectly healthy and is just as feisty as the others." Mum looked at my dad with her big brown eyes and said: "We can't just have one, what if she gets lonely?!" He sighed a great big sigh and pointed to the photo below Spangles. This one showed Spangles curled up in a basket with a larger, grey and white cat. "That's Star, her brother."

Spangles was always my cat, she'd sit next to me and fall asleep, she liked the company but didn't need a fuss. She'd sit just out of reach so she could curl up in peace. Star was the complete opposite, he'd let you know that you weren't stroking him by patting you gently with his paw, or rubbing his face on your chin - there was no such thing as personal space with him! Neither of them were particularly playful, even as kittens, but in his younger days Star would bring home presents much like any other cat, but not the kind of 'presents' you're thinking of. One day he came home with a cloth, another day he returned with a small baby's blanket, if it was yellow you could guarantee

that he would like it. I can just imagine someone washing their

car and turning around to find a chubby fluffball making off with their sponge!!

When Spangles passed away we were all distraught, even Dad! He pretended he didn't like them, "We've got two cats too many" he used to say, but you could tell deep down that he loved them. Star didn't quite understand why Spangles had gone. He'd look around the house for her and then he'd sit and watch us as if to ask when she was coming back. On one occasion he was sleeping on the back of the sofa in his favourite spot, I was watching an animal rescue program and one of the cats meowed on the show. Star pricked up his ears and ran to the front door, then to the back door and then all around the rest of the house. It was heartbreaking and I couldn't bring myself to watch the rest of the program. Star passed away a few years later, just a month before his 17th birthday. If it was up to me I would have got another pet in a heartbeat, I couldn't bare the thought of coming home without a little four-legged friend to greet me, but at the time I was at university and a few weeks after graduating my fiance and I moved into a flat together which unfortunately doesn't allow pets.

We asked our landlord if he would allow us to move in with Kieran's two geckos, and my hamster, Butters. Thankfully he agreed so we had a small zoo in our tiny flat. Eddie is Kieran's leopard gecko, he joined us early in 2018, while Tikki is his crested gecko and has been with us for a couple of years now. We didn't plan on getting a hamster, we weren't even supposed to have pets in our university studio anyway but we fell in love with her as soon as we saw her and despite the Syrian hamster's reputation for being evil little monsters, Butter Bear never did anything remotely cruel! She never bit anyone and she was more interested in running

up and down your arms than anything else.

Fast forward 6 months and we were forced to move out of our flat because we wanted to adopt two lurchers! Poppy and Troy were rescued by Kieran's older brother who lived and worked in Quatar. He found them, along with the rest of their litter, on a building site and loved them for two years but long story short, they're now living very happily with us in the UK.

When it comes to my professional experience with animals that story starts at college. I was studying a Level Three Extended Diploma in Animal Management and had to complete some work experience hours. I already had a Zoo Keeper course planned, but needed some extra hours to complete the assignment. My local boarding kennels offered to take me on for the remaining hours I needed so I ended up working with both domestic animals and the exotic variety! Don't get me wrong, working at the zoo was an incredible experience and I loved every second of it, but I knew from the start that having cuddles with the animals there wasn't an option. While I was at the kennels I had the opportunity to work with, not just cats and dogs, but also horses, donkeys, cows, and goats! Since then I have worked and volunteered at a total of five different animal boarding businesses in order to gain experience from each one because everyone works differently. I did this because my dream is to run my own animal boarding business and in 2018 I became a finalist for the Big Ideas Wales Celebrated competition, this was a national event for young and budding entrepreneurs but since my idea was a little too big and a little too expensive to set up I, unfortunately, didn't win. Never the less, it was amazing to meet other entrepreneurs and gain further insight into how to set up and manage a business.

Now I have graduated from Bangor University with a 2:1 BSc in Zoology, and a first for my dissertation on the defecation direction in dogs in relation to the Earth's magnetic field. I am currently working at Duke Boarding Kennels in Urmston, Manchester, and would love to supplement my hours there with some additional pet sitting and dog walking services.

Fox & Hound Pet Services is all about providing your pet with the VIP treatment! My home is located along the Roe Green Loop Line where your four-legged friend can get some exercise, or if needs be, I can travel to you and walk your dog around your local area. I also offer pet sitting services in which I will come to your house and look after your pets there for as long as I am needed.

Before any of these services are provided, however, I would love to meet you and your beloved pet! So please contact me through Pawshake and let me know what time is best for you!

Dog Walking
An experienced dog walker will pick up your dog from your home for a 30 min walk
5.95 GBP for each additional pet
11.9 GBP
/walk
Home Visits
Book a sitter to visit your home to feed and play with your pets
23.8 GBP for two visits a day
11.9 GBP
/day
House Sitting
A sitter stays overnight in your home and cares for your pet
35.7 GBP
/night

Pick up / drop off

Very pleasant young lady who looked after our dog Buster whilst we went away for the weekend. It was the first time we had been away without him and we were very pleased to hear that he was very happy in her company. Always kept us updated with texts and pictures. Really nice to know that we have found someone we can trust and will definitely be contacting Bethany next time we go on holiday!

Beth looked after our dog, Kylo, while we went on holiday and she was absolutely fantastic - organised pick up and drop off times with our friends who were watching him for some of the holiday, great communication and left our house probably even cleaner than it was when we left!

It was great knowing Kylo was being so well cared for which allowed us to relax on our holiday. He seemed to have a great time too.

I won’t hesitate to use Beth again for walking and sitting services - excellent value for money and a lovely person too :)

Bethany is currently not available to accept new requests.