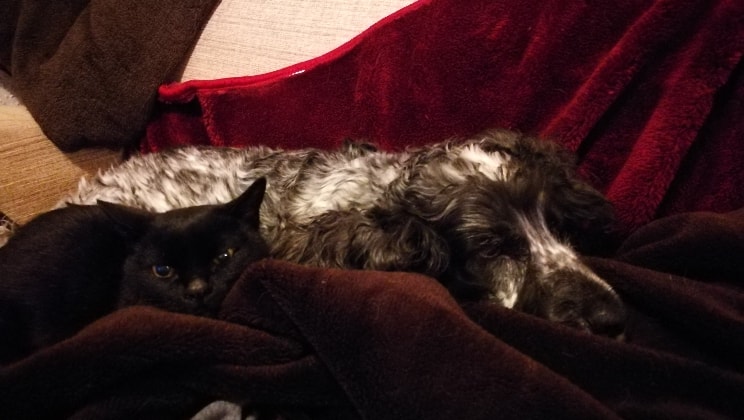 ++update++ I have just adopted a Yorkie/Frenchie cross puppy called Betty-Lou so can socialise yours with her on walks(Woolston only). She is great with everyone so far but it will limit me to walks only now not house sitting.++

Experience with large and small dogs, living in the Woolston area of Southampton. Will walk, train, play and feed, as a regular or one off. Short notice OK.

Afternoons after 3pm untill evenings only.

I do not drive picking up for walks in Woolston is most appropriate for me but can cycle to Netley, Sholing, Bitterne, Thornhill, Western, and West End.

I can take them to the woods, rivers, parks, or just local roads if they need a bit of lead training etc.

I have previously house sat and walked a few dogs in the past but havent been on pawshake for some time.

My personal pet history in case you are interested:

I always wanted a dog when I was young. I was quite scared of large dogs until I met a german shepherd who lived nearby, and seeing how gentle and intelligent she was made me want a dog even more. In my 20s I finally got my first dog. Snoopy was a long haired German Shepherd and rescued from a nightclub bouncer who has since had animals taken away from him by the RSPCA. I had to hand feed him for a while, toilet train very slowly due to his fear of punnishment when urinating. I learnt to offlead train, hand signal train, all sorts. He was the most wonderful, kind, beautiful dog and his fabulous personality saved him from those first few difficult months that couldve ruined him. We became inseparable; Snoopy used to come to festivals with me and friends even considered him one of the gang. He is still to this date the best friend I ever had and likely will ever have and I absolutely adored him. Snoop raised the Rottweiler that my friend, whom I lived with for a while, took in years later called Jake. Jake was terrified of everything from being neglected and chained up in the rain in his early years. Snoopy taught Jake how to play and walk tall. Snoop and I also lived with Jacks my mad black cat, adopted from a friend who moved away. I introduced her to Snoop when she was on heat and feeling very sorry for herself and he looked after her in the times she was bullied by the neighbouring cats. She also looked after him as he got sick. Absolutely devistated to lose him to cancer after 13 years of friendship, Jacks and I were both able to at least bond a little over the grief of his death as she clearly felt his absence. She became pregnant, lost the kittens and became very ill shortly after, but allowed me to nurse her back to health when recovering from her surgery. She now lives with my parents ~ after a short stay with them while I was away turned into her falling completely in love with my folks and their large garden I had no choice but to not uproot her once again ~ I still suspect they bribed her with treats and spoils the way only grandparents can.

I also lived with Merlin, the most incredible Burmese cat and Jarvis the adorable old Blue Roan Cocker Spaniel. They have both now passed away but both taught me so much about animals with constant needs and the amazing job it is to adopt older animals who need rehoming. Jarvis had some problems due to his previous situations; was food obsessed, jumpy, hectic and really needy, absoluetly routine reliant. He settled down after training and strict routines were put in place, but those boundaries helped to heal him so that we could go exploring everywhere together in those last few fun years of his difficult life. He was so fun and just so desperately wanted to play and be cuddled all the time. Merlin was demanding, quite loopy, and often sickly like Jarvis, but also gave so much love it was a joy to know him, cuddly and talkative, adoring and cheeky. The both of them became friends after a slow and careful introduction, which was a very interesting experience. Truly beautiful boys.

I miss all my pets so much but the joy the have brought me is more than I could have hoped for.

Full refund if cancelled before noon one day before the booking, 50% refund afterwards

Rei was perfect gor Buddy, he loved her the minute he met her. She is an extremely competent and caring Pawshake sitter

Rehomed and rehabilitated Dogs with a bad start in life.

Handled large breeds and experienced with walking a pack.

Full refund if cancelled before noon one day before the booking, 50% refund afterwards